We all should wear alarm clocks

What makes you mad? I don’t actually want to know that, but I’ll tell you about my recent experience. I feel pain looking at this:

They proudly say “this is our smart watch”. I’ve never had a conversation with it, therefore I don’t know about it being “smart”, but it definitely seems to be a wristwatch — albeit sort of gargantuan. Also, I think it’s not very smart to recreate something people use for centuries with the latest tech. Maybe there’s a lot of potential hidden in it: but it’s really well hidden. Kinda like “PocketPC hidden”.

Let’s just think for a minute why people use wristwatches, clocks and microwaves (with clocks on them) and why any new representation of the elapsed part of the daily 86.400 seconds isn’t an innovation.

Do you actually want to know what is the time when you pull your sleeve up and look at that tiny clockface?

From my experience, it’s a different story: I want to know whether it’s already the time when I should be doing something different. That timeless classic you wear around your wrist is a design chosen by non-algorithmically thinking guys — at least when it came to the tools they used: they had never seen a computer in their lives. Their design just displays minimalist info and you have to do all the work in your head.

At first sight, you can see that those battery draining, LED shining, wrist ruining beasts just try to mimic the looks of their ancient mechanical predecessor. Why? Or rather: why the fuck? (You can observe my self-control in the absence of typing in all-caps.) Why would anything with a multicore processor try to mimic something I don’t even want to wear anymore?

Even those guys doing LCD wristwatch designs in the 80s had better imagination. 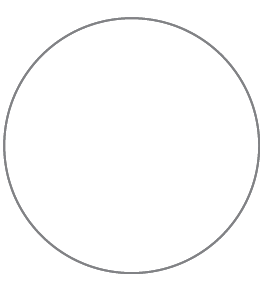 Let’s keep talking about a “smart watch”: something that enables us to make a better use of our time. I could scrap the idea of wearing a time management tool on my wrist altogether and write about wearable-anything, but this article would become so long that it would crash your browser.

My idea is to actually use the power of the computer inside: to switch from the pull paradigm in which I get the simplest data about the environment and have to draw all meaningful consequences myself to the push paradigm where the work is done on a much larger scale by the tool — and not only the information is presented, but even the time is observed by the machine. Even in the times long past, the towerclock served primarily the bell-ringer who occasionally notified everyone to perform their prayers.

(this image is intentionally displayed again)

Let’s scrap the clockface. We need something stronger. If I don’t have my plan in my head, the screen is effectively blank.

Most of the time, I can even guess the current time pretty accurately (there’s the sun, people around, radio broadcasts, shops and cafés opening and closing etc.) and that further belittles the added value of wearing that piece of metal and/or plastic.

“I want to know whether it’s already the time when I should be doing something different.” 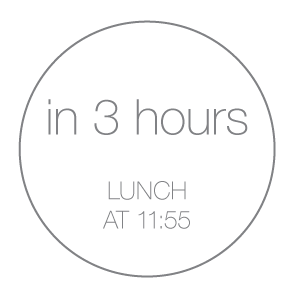 This is the basic premise. Whenever you look at the watch, there’s what’s coming next. And yes: there isn’t any display of the time elapsed since the last witching hour. There aren’t those two groups of two digits. Not even those familiar hands, Dave. (Notice how I cowardly kept the circular shape of the thing. Feel the hypocrisy. And the emotion.)

So, you have roughly 3 hours to do anything you’re doing now and then you should proceed to… having a lunch! Is there anything you need to know about your time now? I don’t think so. (Though, please tell me if your opinion differs. I’ll gladly listen. Anytime.)

I’ve thought about this for a moment and found another frequent time-bound task: measuring various timespans — starting now. Brewing a tea? Cooking? Using the pomodoro technique? Having a nap? There’s an easy way to accomplish this. A very simple countdown. 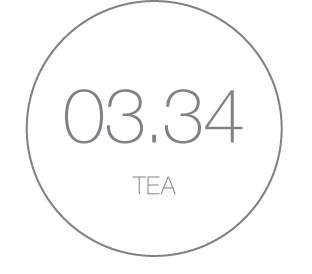 Both of these fuctionalities are triggers waiting for their moment in the future — they are a little more sophisticated alarm clocks. Even the greatest thing about microwave is that “ding!” inviting you to burn your fingers while taking the smelly instant noodles out of it. Being notified about the important things is easier than keeping them in your head (think of the time you left the pot on the stove and went to read “one or two e-mails”).

Display of the current time of the day gets the bronze medal (third spot is not bad, but I suspect that the drug test could reveal something rotten in this kingdom). It’s the safety option for times when you don’t have a plan, but feel like you should have one, no matter how silly that is. 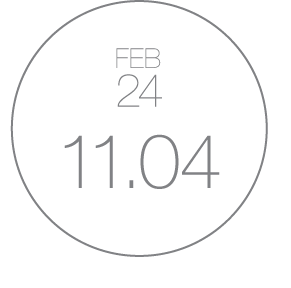 Right now, I don’t care much about the details. Such as having enough battery power. I don’t care about people who use wristwatch as a status symbol or something completely different (bottle openers etc.).

I don’t know how to interact with this gadget — maybe I want to talk to it. Maybe I could learn a few distinguishable whistles. Maybe I want to touch it. Wave over its screen. But I want to see the next thing in the line of my life first and be easily able to measure the passing time when I want to.

I don’t care about how many cameras, sensors and other stuff we could cram into the device. I could say that I already have a camera in my phone (and soon in glasses, too) and can’t see a point in integrating it into another device, but I won’t — anything’s possible.

Of course, a funny worm in my brain keeps silently contemplating what comes next. So there you have few more ideas.

First, alarms are seemingly a very important feature of this thing. Instead of beeping, something glued to my hand (during the hot summer season quite literally) can be sure to get my attention when it vibrates. Or maybe it could sting me or surprise me with a sudden chill. Let’s kill those beeping squeaking noises everywhere. And let’s still use the display’s surface reasonably. 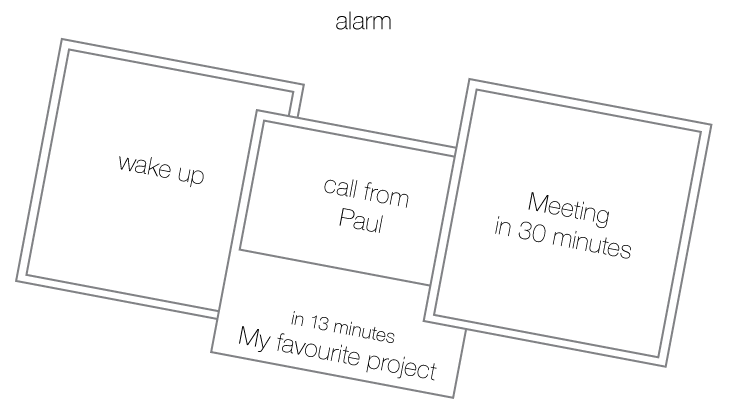 (Changing the shape of the display occured as more text got in. Is that a good thing? Maybe. I won’t know before I try this for real.)

Second, let’s get deeper into it. There is a gadget telling me stuff about the future. I know that the moment I live in has to be lived by me and not by my wristwatch. But sometimes I may want to be reminded of what I actually should be doing now. Iterating on the previous design, it might look like this: 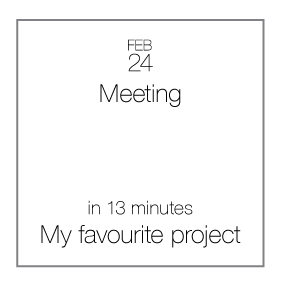 And as overrated as it is, the present moment is kinda important. Sometimes I need to know how my environment looks and feels like (especially when getting dressed). Let’s add the weather information on a secondary screen.

The idea about the temperature difference from yesterday is not mine — I encountered it a long time ago on the interwebs. The device knows my location and can compare different places when travelling.

Yes, my position in the world isn’t unchanging — most noticeably the geographical one. Sometimes I just want to find my way home or even where the hell I am right now (“yes, you missed that right turn”).

And I might even want to track my wandering in the world: be it checking in on Foursquare or tracking my 5K run. Maybe even with a little help from various health sensors.

You can see the related actions: again, I don’t know how to access them. Speech seems to be the solution now — but where is the mic? Maybe I want to draw my hand to my mouth everytime I whisper the secret orders to the magical machine. Maybe I don’t. Every functionality might have a broader array of options on this device — or not. We all have a bunch of other devices well designed for specific tasks. 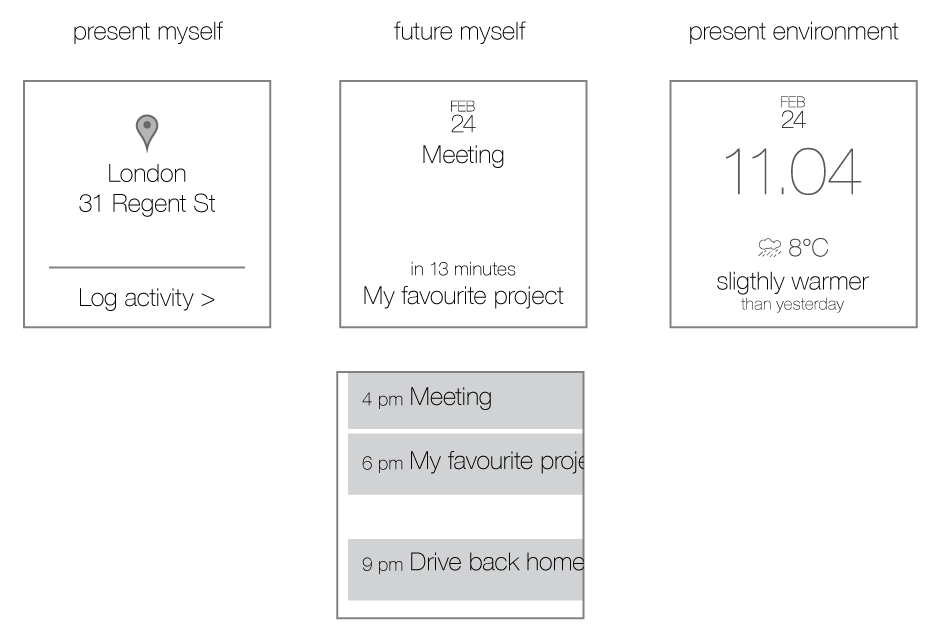 Those were just some thoughts on a device that could help me to make sense of the time and place in front of me and around me, respectively. These rough sketches might not be pretty or actually “right” but I consider them being much better than those “real things“ pictured on the photo above. Let’s uncover the potential of the technology instead of paying homage to the wonderful gadgets of the past. 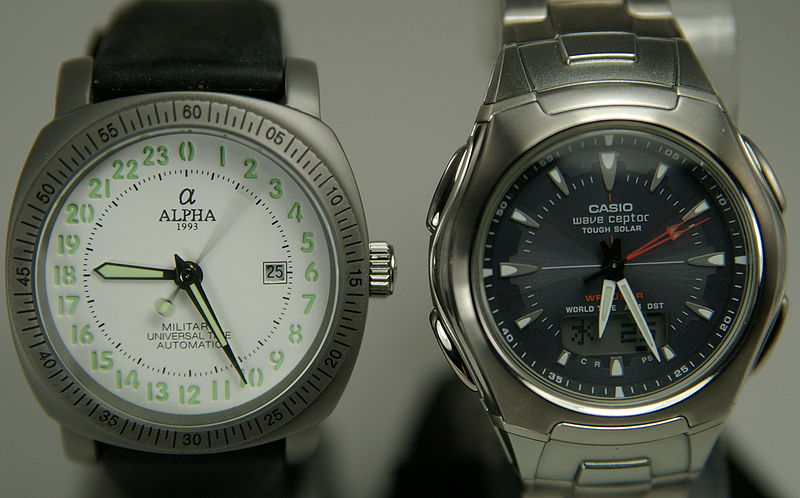 Alarm clocks mentioned in the title are not the perfect description of the outcome of this thought experiment (yep, I wouldn’t call that a design process). They’re still something becoming antiquated. But they are much better functional metaphor — they respectfully wait to remind you of something instead of cheekily mocking you for your inability to notice the moment when it wasn’t already too late.

This all is only a shadow of what could emerge if someone did a research on a population bigger than one person (that’s not a very representative study, to be sure). Maybe you wonder why I wrote all this — because much of the change has already happened. Instead of wearing wristwatches, we just carry a cell phone that works much more like the described wearable. But then again: even those smartphones keep those four digits almost everywhere.

I hope someone will embrace this foolish idea of making a watch that does not display time.